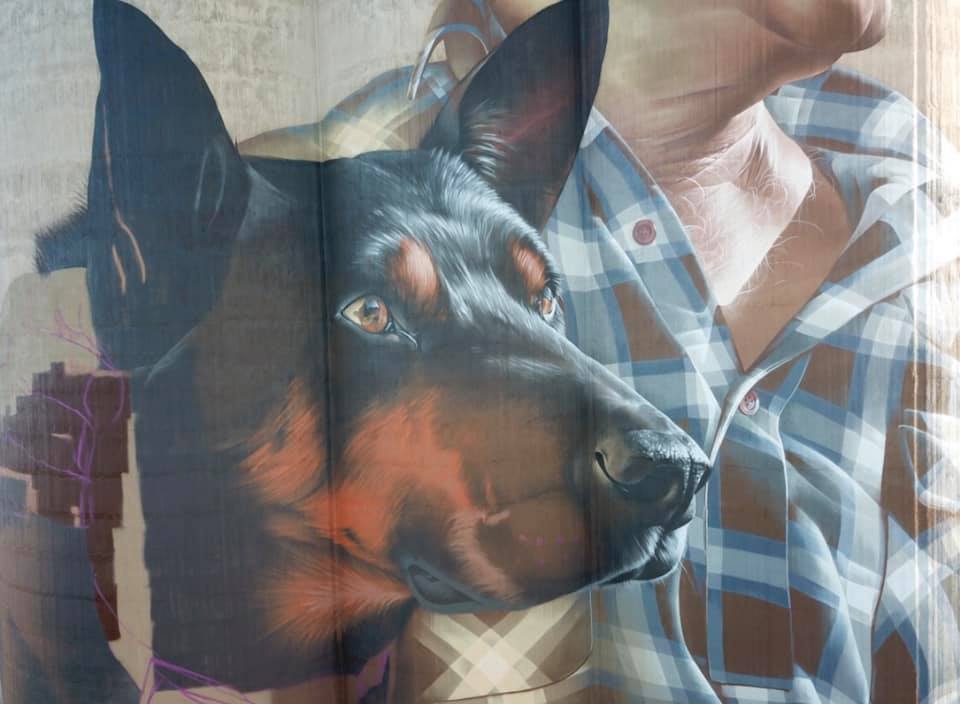 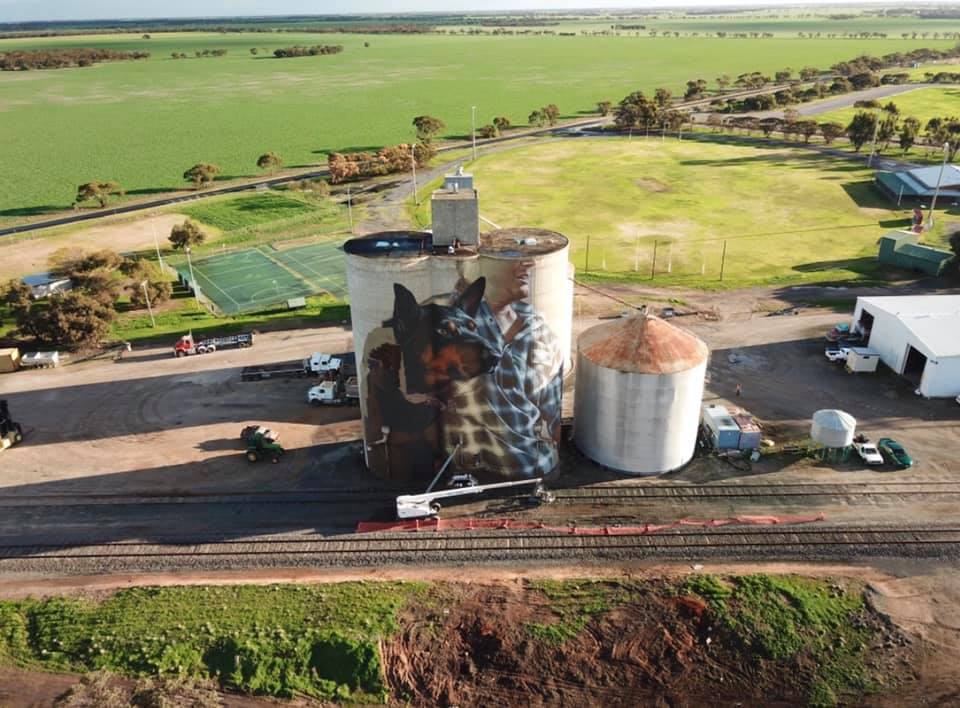 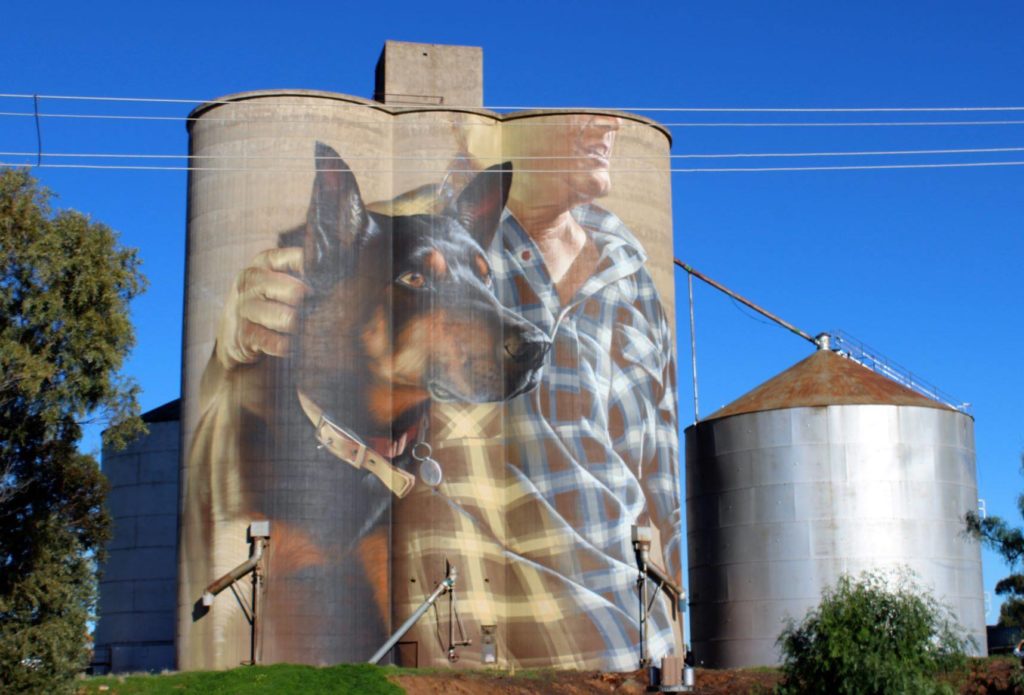 Watching the project unfold and the art work emerge was fascinating, as artist Sam Bates (Smug) worked his magic transforming the face of the silo.
On the first two days, he covered most of the eastern aspect of the 80-year-old concrete silo with sections of brown, charcoal, grey and flesh coloured tones. The paint used as a base was a “house paint” to seal the aged silo wall and provide a base for the spray paints to be used over the top of them.
Community members eagerly observed the progress of the art work, and it wasn’t long before the outline of a kelpie sheepdog and farmer gradually emerged on the concrete canvas.
Artist Sam Bates had his challenges with the weather conditions over the two weeks. Rainy days with cold gusty winds, hard to endure at ground level, were considerably worse at height in a “cherry picker” up on the side of a silo! Those wild winds no doubt played havok with the intended destination of the fine spray paint particles at times.
Smug is known for his artistic mastery using aerosol spray cans, but given the sheer scale of the silo wall project, he also did some mixing of his own paints. He used a larger paint “sprayer” with a wider spraying diameter of cover to paint the large silo surfaces.
The enduring farmer fashion item, the checked flannelette shirt gradually emerged, taking pride of place on the silo wall. As the artwork unfolded, the viewer was left in awe at the skill of the artist able to create such amazing large-scale wall pieces keeping perspective, creating light and shadows, capturing texture, all with meticulous attention to detail. With photo-like realism, he captured the texture of the flannelette shirt, the classic check pattern with material folds as it drapes down over the farmers body, the raised button placket, the chest pocket, and folded-up sleeves with open neckline revealing the farmers weather-beaten “V-neckline” and greying chest hairs.
Details of the kelpie sheepdog were the last to appear, with its upturned ears and attentive eyes indicating that this working dog was ready for work. The soft-coated black and tan Kelpie while looking contented beside his master, also looked ready to respond to any given command. The artist cleverly created a sheen on his coat, a shiny black nose, a spark in his brown toned eyes and fine grey whiskers above his semi drooped mouth.
The dog collar with silver buckle and registration tag were completed on the final afternoon. As a “nod” to the history of Nullawil the registration disc has a “galah” and “stick” engraved on it. The name of the town is derived from two Aboriginal words, “Nulla” which means killing stick, and “Wil” derived from the term “willock” meaning Galah.
Low on the southern aspect of the silo, not far from the local stylish maroon PREMIERS ’98 graffiti, the SMUG signature sits.

The process of appointing an artist involved the committee negotiating with award-winning street art network Juddy Roller-a company with artists who specialise in painting silos and other large buildings.
The artist commissioned was Sam Bates also known as Smug, or Smug One, an Australian contemporary street artist, known for his photo realism graffiti work. He was born in a small Australian town south of Sydney. Smug is known for painting engaging large scale photo-realistic graffiti street art murals around the world.
He now lives and works in Glasgow, Scotland, and flew into Australia early in July to begin the project.
Like a musician who plays by ear, Sam is a self-taught artist, and his artistic creations are indeed “Music to the Eyes”. As with many “hands-on” learners, traditional school education wasn’t a “great fit” for the development of Sam’s artistic talents. It wasn’t until he finished high school that he picked up a spray can and with a dash of rebellion started to develop his craft. As time went on, with plenty of “on the job” practice, and innate creativity, his skills developed, and continue to evolve. His early art works were perhaps more edgy revealing his fascination for skulls. He has gradually developed his own unique style of photorealistic graffiti displaying meticulous attention to detail. Smug has become one of the most talented street artists, creating amazing large-scale wall pieces around the world.
The Nullawil Silo Art is not the first Sam has painted, creating the wood cutter and red-capped robin on the Wirrabara silos

Written by the Nullawil Community 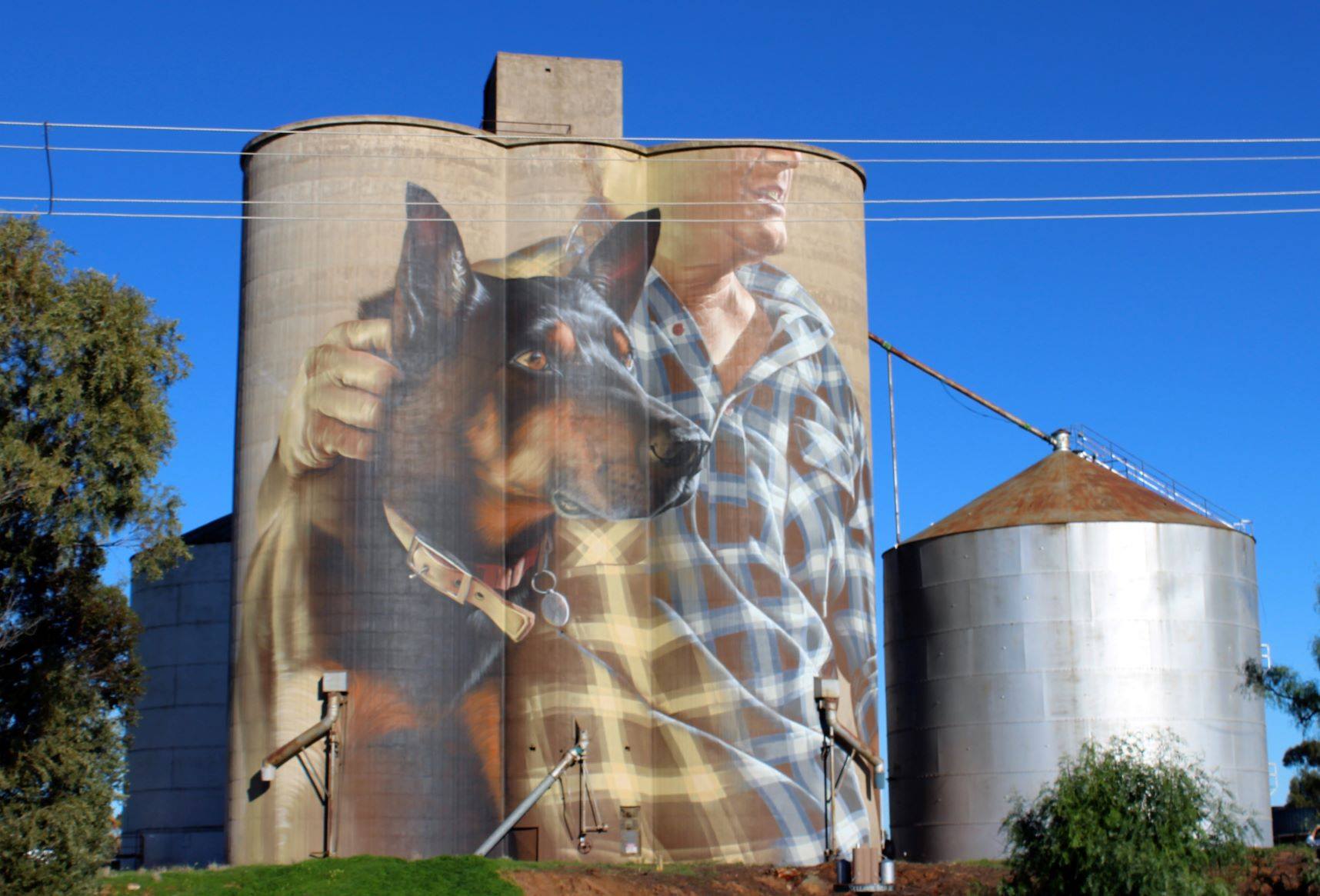